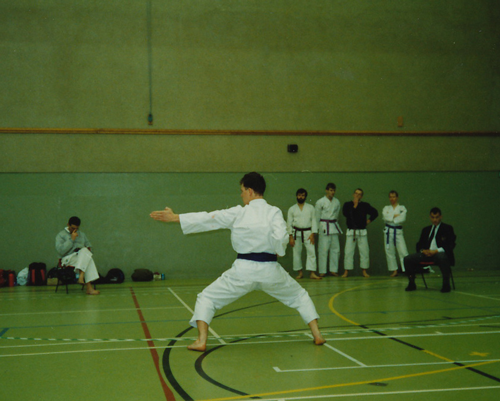 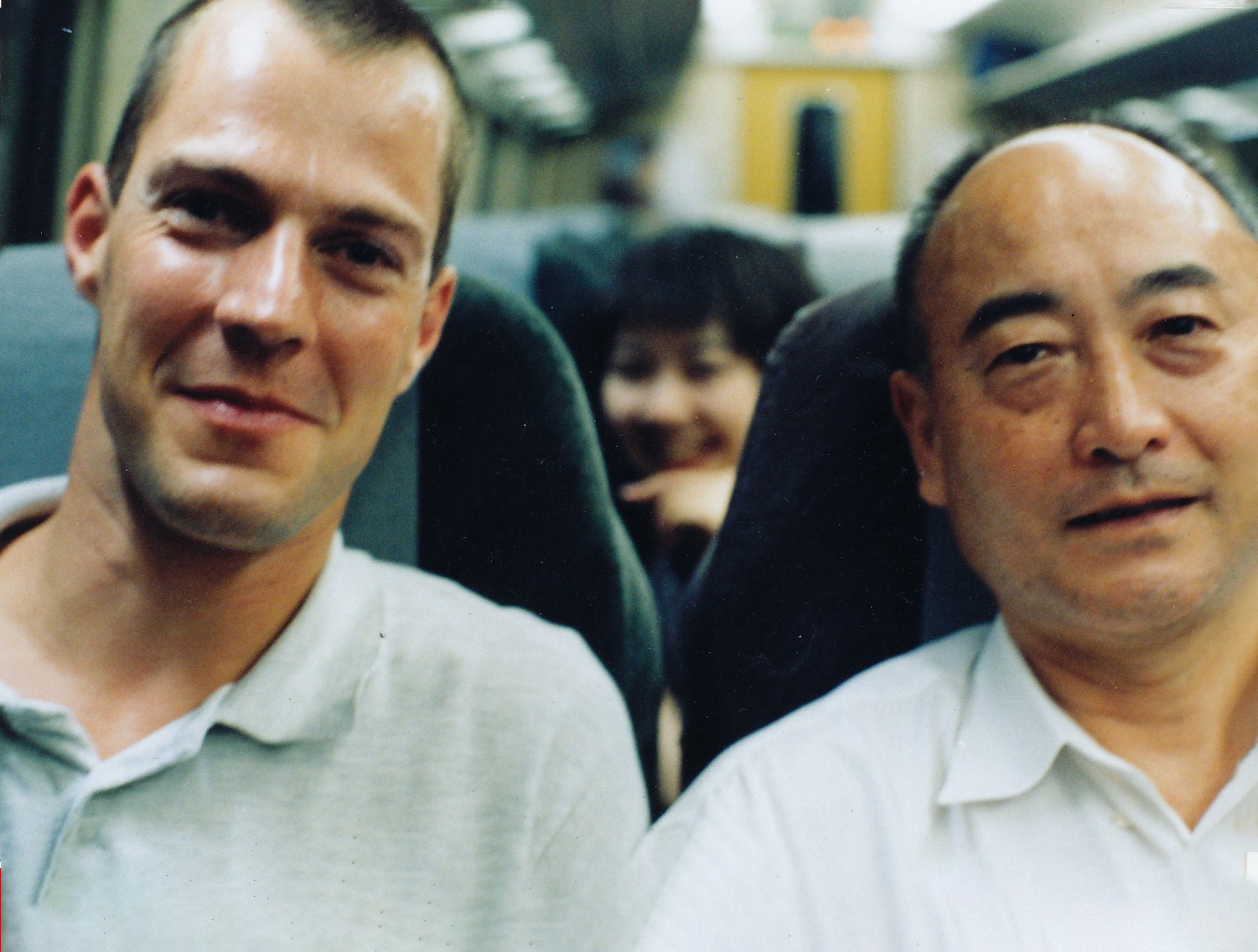 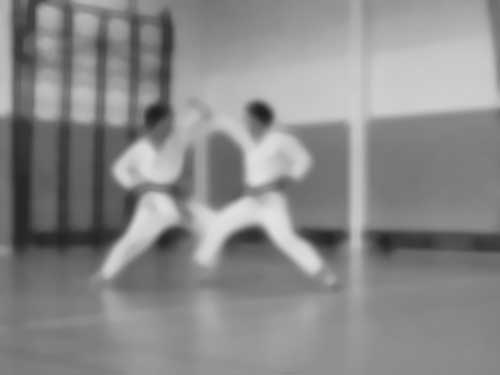 The morning of December 22, 2019, I received a message from Naito Takashi Sensei. He informed me that Abe Sensei had passed away the previous day and that today his funeral was in Matsuyama. I fear that not many people in our dojo nowadays know the man. So even more reason to commemorate him as one of the key figures to shape Shotokan karate as we know it. Much is written elsewhere, so let me here add something on my personal relationship with Abe Sensei to more general observations on this remarkable man. He greatly influenced my karate during those highly formative years when I trained in Japan at the JKA Headquarters. 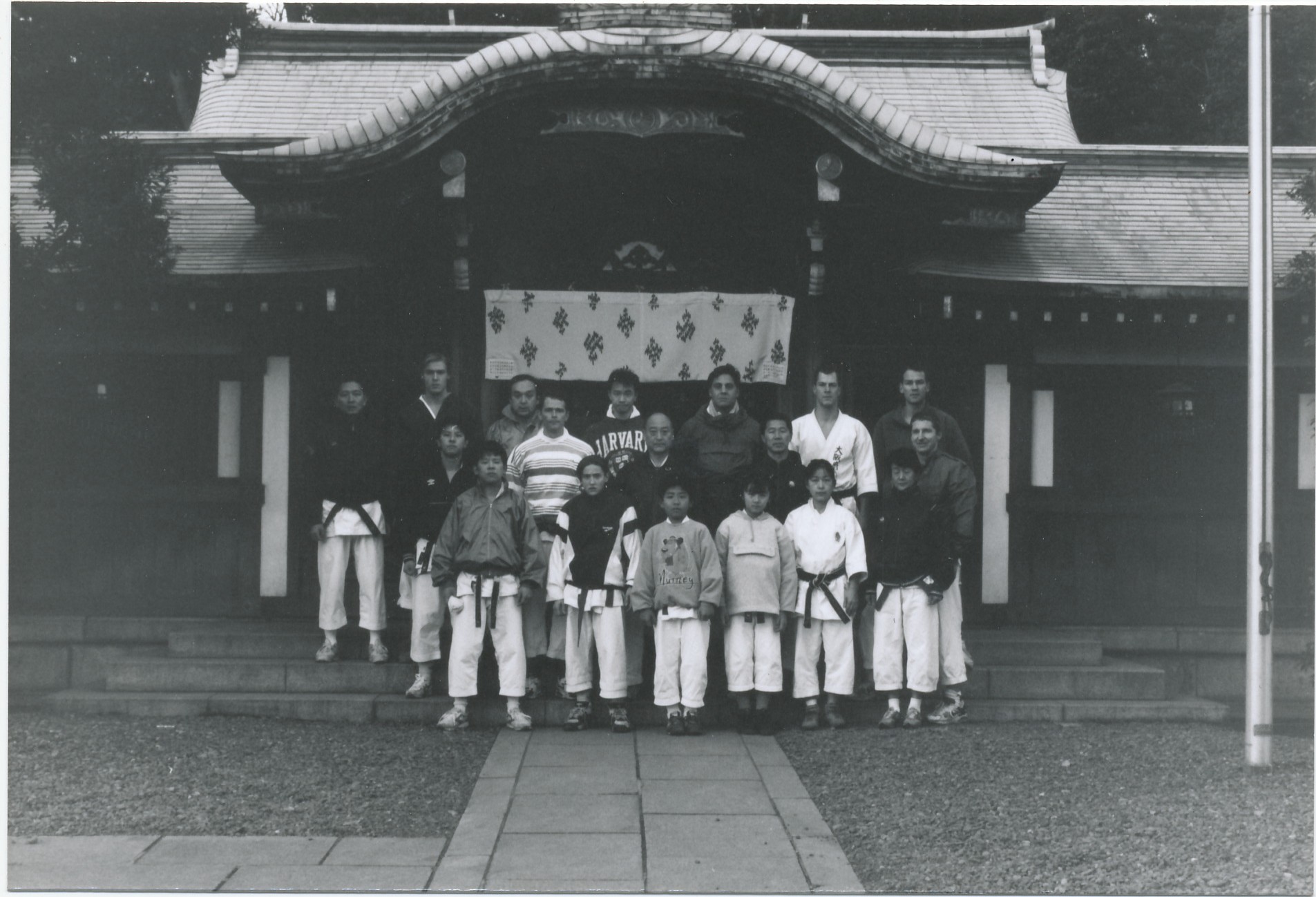 Kangeiko 1996, visiting the local shrine. Abe Sensei in the middle. Also in the picture Kagawa Sensei (next to Abe), Amos Sensei (top right) and myself (next to Amos)

Before I went to study in Japan in 1994, I had been training karate for some years. I had trained with Enoeda Sensei while studying in England and was a member of the JKA in the Netherlands. In those years I had heard about the split in the JKA. I was with the true JKA, I was told, and then there apparently was also another JKA, led by a man called Asai and a man called Abe, who had stolen the administration of the JKA and formed another group, claiming that their group was the real JKA. Anyway, this was the message I had heard.

In 1994 I moved to Osaka to study and contacted the local tourist office to ask where I could find a JKA dojo. They gave me a number that I called. Someone answered in a strong Osaka dialect, but I did eventually understand where I had to go. This is how I became a student in the dojo of Kagawa Masayoshi Sensei, the older brother of Kagawa Masao Sensei. Kagawa Sensei introduced me to the Honbu Dojo in Tokyo and advised I go train there for a month or so before going back to the Netherlands. He asked Kanayama Sensei to take care of me, but Kanayama in turn asked Naito Takashi to put me up in his office for the month, sleeping on the couch next to the fax machine. 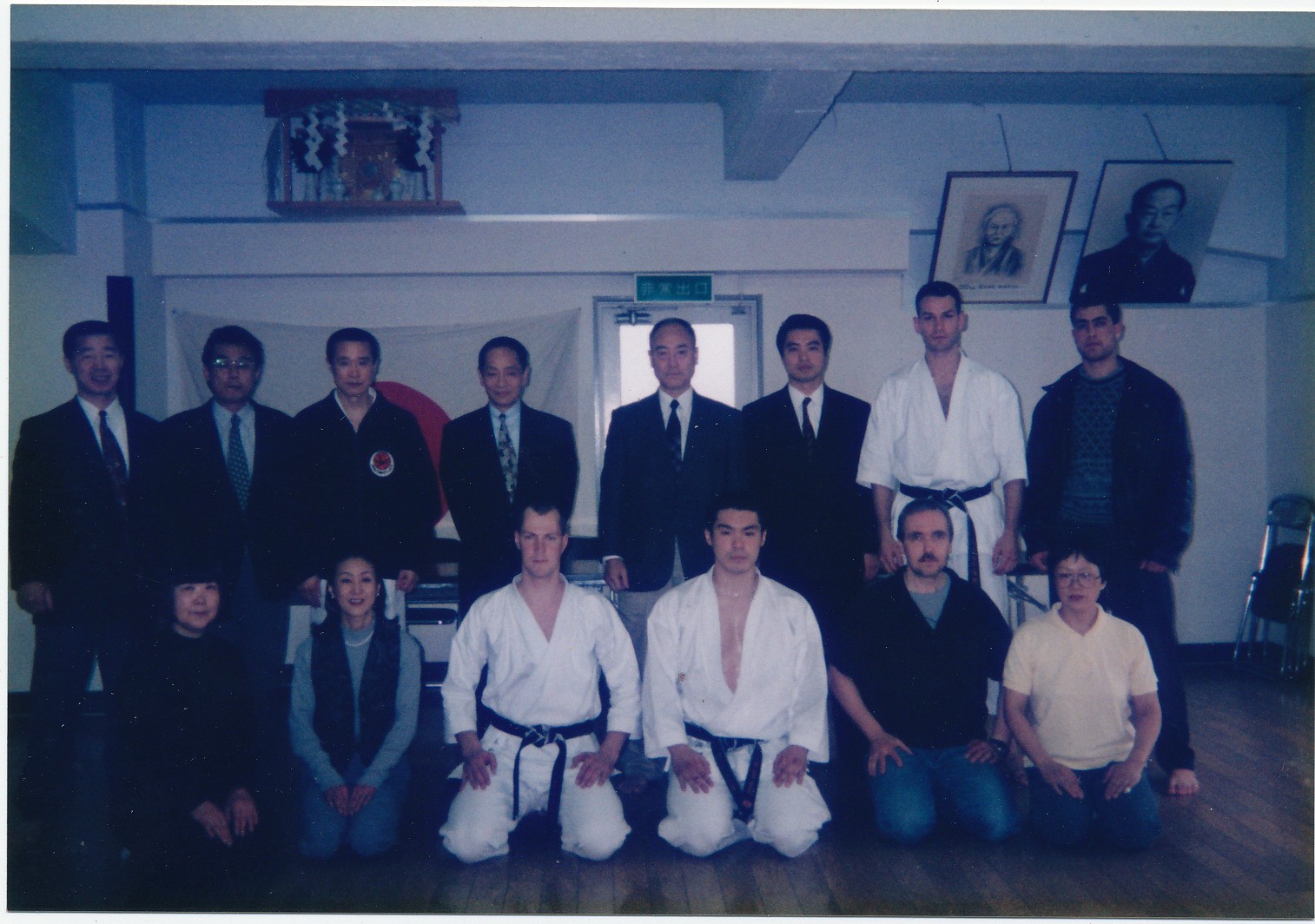 Of course I knew all the top instructors of the JKA from the Nakayama books. Call me naive, but it was only when I went to the dojo and Abe Sensei walked in that I understood I had been training for a year and a half in the rival JKA. It was clearly too late to worry about that and Kagawa Masayoshi Sensei had treated me very kindly as it was. This is how my relationship with Abe Sensei started.

In 1997 I was invited to the Instructors’ Course of the JKA and Abe Sensei, as Technical Director, was responsible for my technical progression. Nearly 60, he was still formidable. Not exciting like Yahara Sensei, or esoteric if not divine, like Asai Sensei, his technique was simple, but effective, his timing perfect. The standard he set formed people like Kagawa Masao Sensei. In his youth he had been a brutal fighter, disqualified often for the way he destroyed his opponents, which was why he did not win many tournaments. Besides having been invited by Nakayama Sensei to instruct at the Honbu, he also taught at the Nihon Daigaku Riko Gakubu, the Technical College of Japan University. Allow me to digress here, because this connection in later years was very important for me. Both Nagaki Sensei and Naito Takashi Sensei studied at this university and trained under Abe Sensei. Naito took me under his wing many years later and invited me to teach at this very old karate club that had such a strong track record. Some of my best karate memories are of teaching years later, when based at the Dutch embassy in Tokyo, the excellent students of this club. 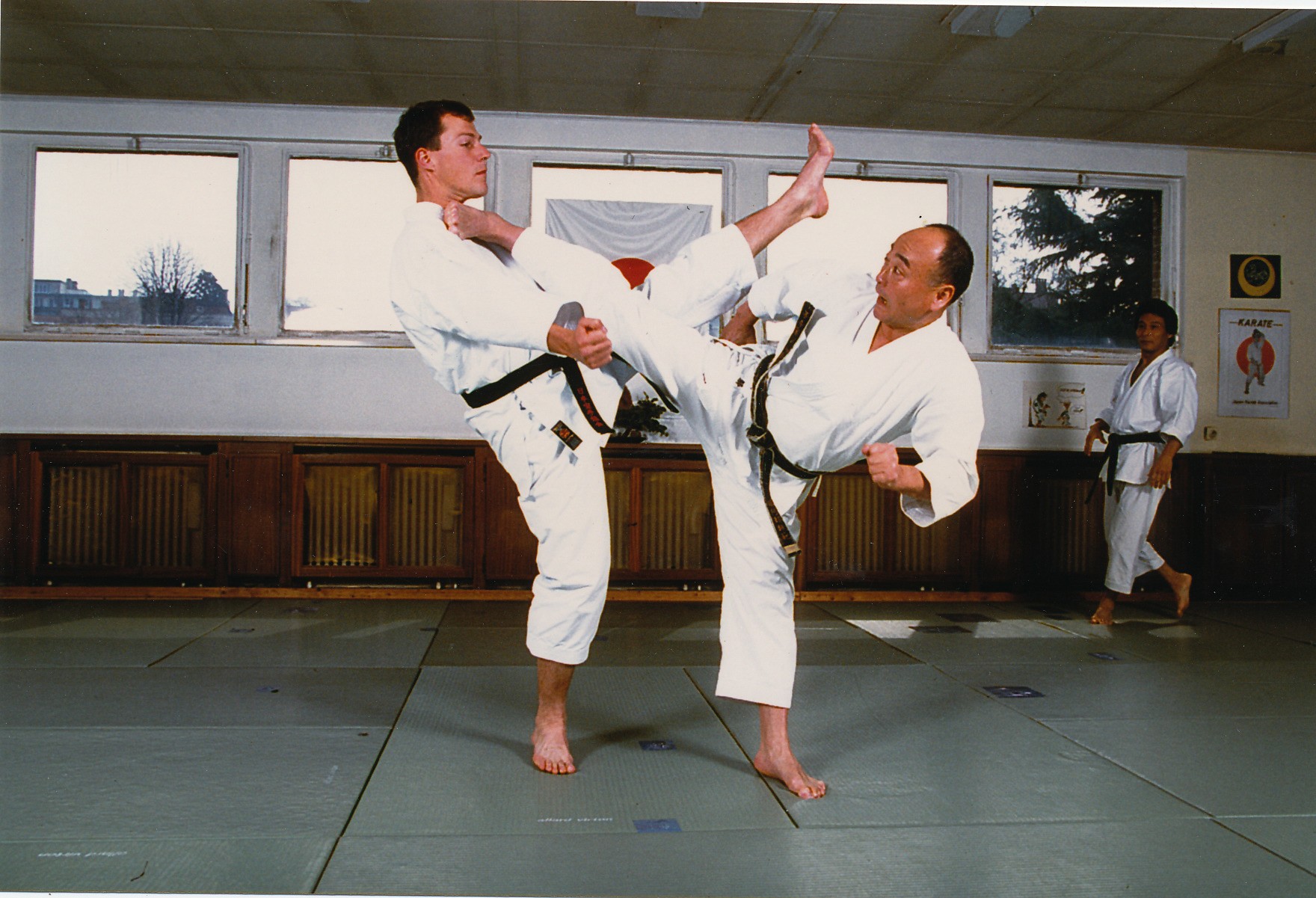 Anyway, his students would applaud Abe Sensei during competitions for the destruction he caused in sheer admiration, or so I have been told. Few students at our own SKCA will remember, but Abe Sensei came to our dojo once, I think around 1997, when I was showing him around in Amsterdam. He did not teach, just came to watch a bit. But he was there, in the Palmstraat.

That week was special, in various ways. Abe Sensei never gave much thought to whether his actions and behaviour would cause problems to others. He would expect me to show him around, pay for him, would not hesitate to pressure me for my father’s car. He was widely known for the way he would without any qualms ask his hosts for more expensive wine, to buy him antiques, or to drive him to far away places, just because he liked to be driven. It could be difficult to please him. On the other hand, in Japan he would surprise students like myself with an invitation to go on a drive around the countryside, visiting temples and various little food shops. Unlike other instructors, who would shout out just your name and give curt commands, Abe Sensei would use the suffix ‘kun’ with your name, indicating your junior position, but at the same time a nice and gentle touch, showing intimacy. And he seemed to dislike the sometimes violent pay-back in the dojo. I remember one day that one of my seniors decided to punish me and was stomping on my head while I lay bleeding on the floor, when Abe Sensei gently said to the senior ‘well, I think that is sufficient now’, stopping the action without embarrassing the senior.

Abe Sensei was a product of a Japan that is disappearing. Part of that has to do with an undercurrent of nationalism, feudalism. Some might say that the brutality, but also the strength and spirit of the JKA instructors of his generation was influenced by the militarism of the 30s and early 40s. Abe Sensei was of samurai stock and proud of it. On the other hand, he was very open and inviting to non-Japanese, loved to travel and had a genuine interest in other cultures. He certainly was not an average person, he was a cultured man, with a strong hand at calligraphy, and an able swordsman with a vast knowledge of history and the ability to marvel at little things. Years after the event he would recall how wonderful it was to have seen, during a canal boat trip in Amsterdam, a cormorant struggling to devour a large eel. 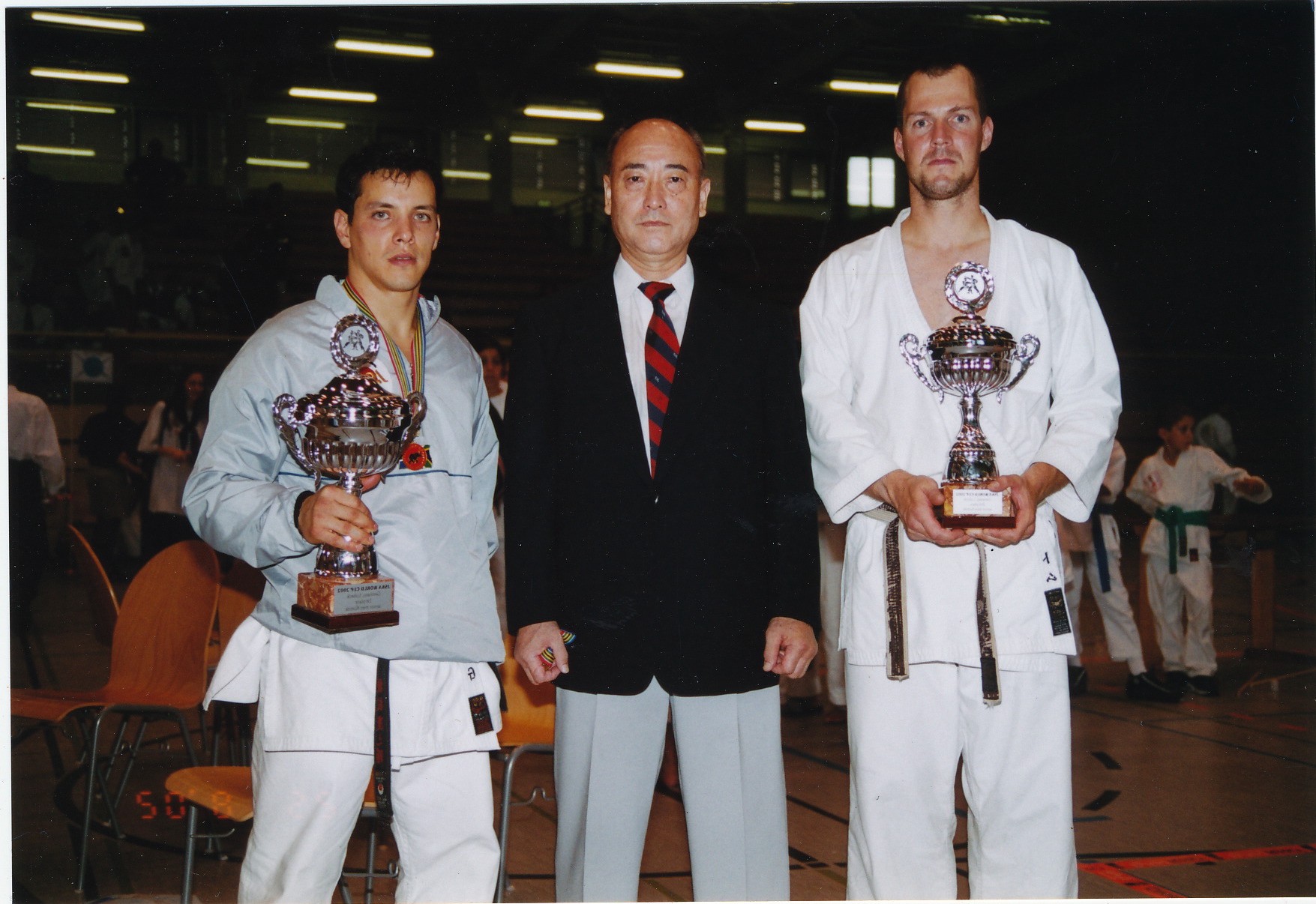 Towards the end of 1998 the JKA-Asai lost the court case against the other JKA and in 1999 the instructors that had been the backbone of the JKA-Asai went their separate ways. Yahara Sensei started the KWF, Asai Sensei the JKS and Abe Sensei the JSKA (I am happy to remember I played a minor role in helping him sort out the name).

A highlight was the 2002 JSKA world championship in Germany, organized by Sensei Dieter Flindt. I had won the last JKA-Asai world championships in 2000 in Cardiff, but Abe Sensei had already not been there. It was wonderful to compete at the well-attended 2002 championship in front of the man who had been so important for my karate in previous years. The final that I lost against Ricardo Galina of Mexico was one of the most exciting matches I have been in, both because of the wonderful atmosphere around the match and because of the praise I received from Abe Sensei afterwards. 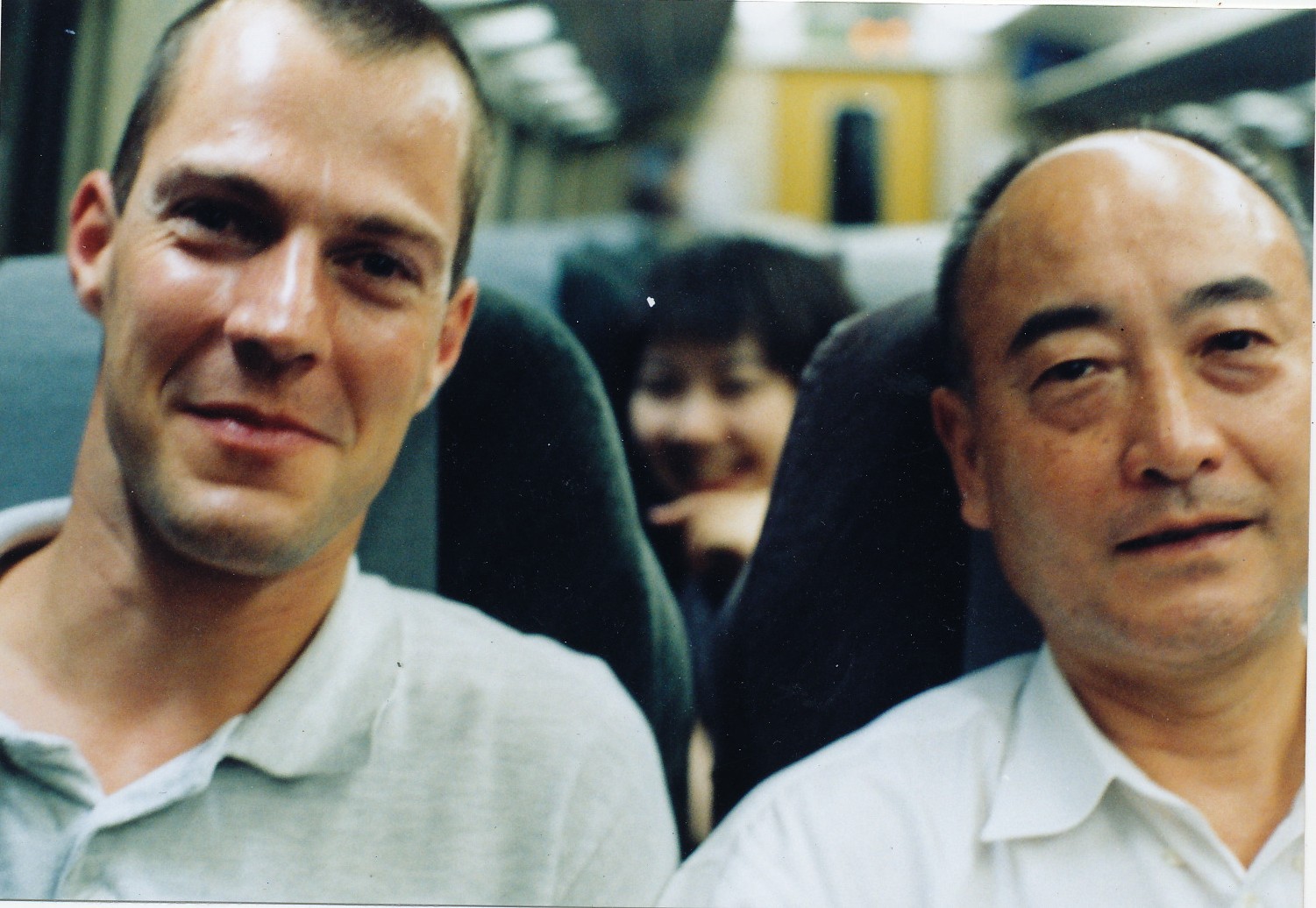 Although active with his own organization, Abe Sensei also recognized early on that it was essential to be active within the federation, where he was well-known as a referee. It was thanks to him that Kagawa Masao became the Teikyo University coach, and based on that success theJapan Karate Federation Head Coach. One might say that the Shotokan of the JKS, which through Kagawa Sensei he so strongly influenced, has become more sport-like, but on the other hand, it is thanks to him that within sports karate there is still such a strong Japanese traditional current, keeping the karate of the JKA alive as much as possible.

When Abe Sensei was diagnosed with cancer, his chances of survival were considered remote. Although he had suffered very serious surgery and had become thin, losing his original strong physique, he went on to live many more years, in which he traveled far and wide, happily continued drinking and eating, and still taught karate all around the globe. Of course he could no longer show many of the things that he had been proficient at, but he remained a very special and clever instructor. He will be missed by all who trained with him. Abe Sensei was 81 years old when he died. The fond memories remain.